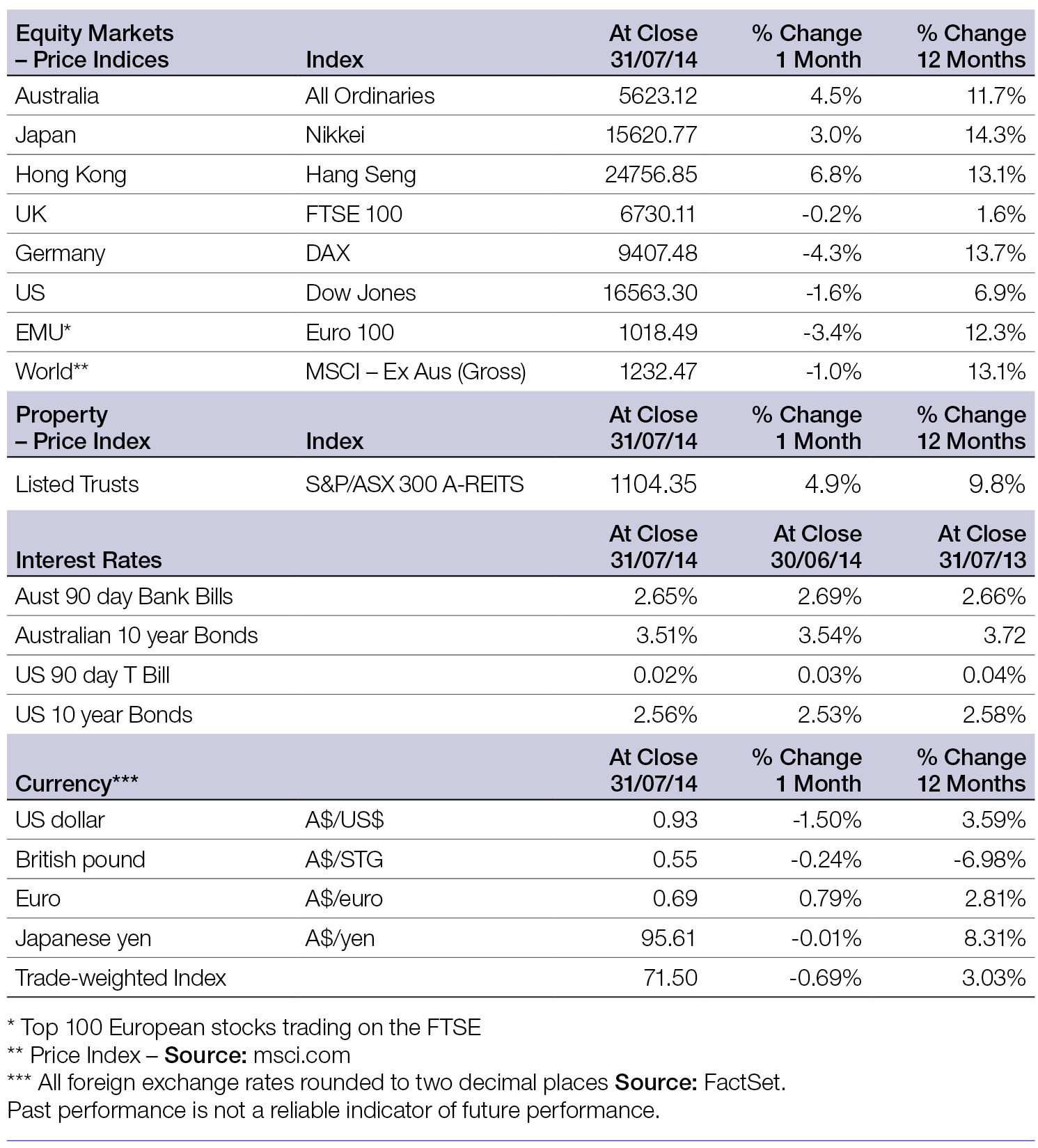 Global growth continues to show considerable resilience despite the geopolitical tensions in the Ukraine and Middle East.

As was largely expected, the US economy rebounded strongly from the extremely weak Q1 GDP growth of -2.9%. The Q2 GDP growth of 4% was warmly welcomed, but not unexpected.

The concerns over the sluggish Chinese economy in the early part of 2014, has been replaced by further positive signs of a gradual recovery in the Purchasing Managers’ Index (PMI) data.

The July Eurozone manufacturing data improved but continues to be impacted by the crisis in the Middle East and the Ukraine.

There has been a rebound in Australian consumer confidence, with retail sales up, albeit from a low base. While housing construction continues to gain momentum.

The RBA kept the cash rate at 2.5% in August, and it’s anticipated that interest rates will remain at this level well into 2015.

Heading over to the US, the economy bounced back sharply in Q2, following a weak, Q1 GDP growth of -2.9%.

Manufacturing data for July was consistent with an improving economy, delivering the highest index reading since May 2010, with new orders rising sharply.

Although the June US Consumer Price Index came in at 2.1%, the Federal Reserve Chairperson, Janet Yellen, in the semi-annual economic report to Congress, indicated that the recent acceleration in inflation was not of concern, with extremely subdued wages growth. The Federal Reserve will continue with its current policies of keeping interest rates exceptionally low to boost economic activity.

This was the sixth consecutive month that the US economy has added in excess of 200,000 jobs, with job creation in July coming in at 209,000. The unemployment rate was marginally higher at 6.2%.

Bond purchases have been reduced from $85 billion per month down to the current $35 billion.

In Europe, the July PMI data has improved, with latest figures showing manufacturing data has been at its strongest since April. The services data, in particular, has improved.

However, there was considerable divergence across the Eurozone’s manufacturing data. Germany was particularly impressive, experiencing the best growth in its service sector in over three years. While on the other hand, France remained weak, with its manufacturing output falling for the third straight month – its sharpest decline since April last year.

The rest of the Eurozone recorded the largest monthly increase in business activity since August 2007. New orders also grew at the sharpest rate in seven years.

Despite the July recovery, growth in the Eurozone continues to be impacted by the fears that fighting in Iraq would push oil prices higher, as well as concerns of further escalation in the Ukraine crisis.

An improvement in July data across Europe follows the European Central Bank’s (ECB) June decision to introduce a raft of measures aimed at stimulating the Eurozone economy. These included negative interest rates and cheap long-term loans to banks.

In the UK, PMI services data was stronger although the manufacturing data was more subdued. The UK economy is slowly recovering, with a GDP growth of 3.1% for the year ending 31 July 2014. Order books have continued to improve, while employment growth is at its highest level in over three years.

Over in China, the government’s targeted growth stimulus policies appear to be having a positive impact on manufacturing data, with a significant improvement in its export market as well. Export growth in July was up 14.5% year on year. Interestingly, there was a 17% increase in exports to the European Union.

The Q2 GDP data of 7.5% indicates a stabilising Chinese economy – on track to meet the government’s 7.5% forecasted growth for 2014. The NAB forecast for Chinese economic growth in 2014 remains unchanged at 7.3%.

The property sector in China remains a concern with prices continuing to decline through July.

The Japanese economy continues to move forward despite the impact of the introduction of the April sales tax and its lingering effect.

Although the Japanese July PMI was lower, the services data signalled improved business conditions, with output returning to growth territory for the first time in four months. New orders grew at a modest pace for a consecutive month.

Annual average growth in industrial production rose from 4.0% in May to 4.7% in June – its highest level since April 2011.

On the home front, the Reserve Bank of Australia (RBA) has left the cash rate unchanged at 2.5% at its 5th August meeting. The RBA indicated that the inflation outlook has remained consistent with the forecasted target (2-3%) due to modest wages growth.

The RBA also stated that export growth, as well as the outlook for housing construction remains strong, while also noting consumer demand growth has been moderate.

Manufacturing new orders have shown consistent improvement over the past six months, albeit from a low base.

As expected, the terms of trade continued to decline in Q2. With the weakness in bulk resource export commodity prices over recent months, the export price index declined -7.9% in Q2, owing to a -16.6% fall in metal ore prices.

The S&P/ASX 300 Accumulation Index had an outstanding month in July, increasing by 4.4%. This followed the disappointing month of June.

The S&P/ASX 300 Industrials Accumulation Index also had a stellar month, up 3.8%.

The broader S&P/ASX All Ordinaries Index was up 4.5% in July.

Going down: No sectors were down

However, the global indices had an extremely divergent month with regards to performance.

The Hong Kong Hang Seng Index was the outstanding performer in July, up 6.8%.

The Japanese Nikkei Index was also an outstanding equity market, up 3.0% in July.

However, the German DAX was the worst performer across global markets covered in this analysis, down -4.3% for the month.

Australian bonds rebounded after a poor June. For July, the UBS Composite Bond All Maturities Index was up 1.37%.

Global bonds (unhedged), as measured by the Barclays Capital Global Aggregate Index, posted positive returns for the one year period ended 31 July 2014, up 1.46%. The hedged index posted a strong one year gain of 7.58%.

In July, the Australian Dollar (AUD) was up relative to the Euro but down against other major currencies. The AUD declined -1.5% against the US Dollar (USD), to finish the month at 93 US cents. Over the past 12 months the AUD has increased 3.59% against the USD.

The information contained in this Market Update is current as at 5/8/2014 and is prepared by GWM Adviser Services Limited ABN 96 002 071749 trading as ThreeSixty Research, registered office 105-153 Miller Street North Sydney NSW 2060. This company is a member of the National group of companies.