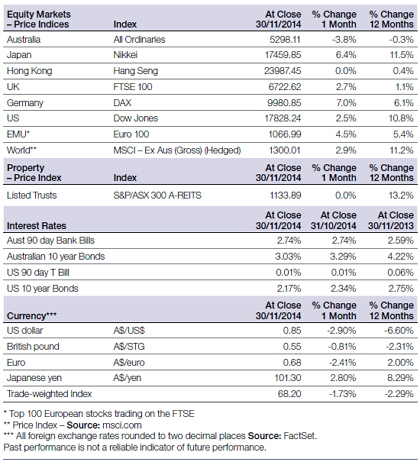 Oil prices decline by 30% during October and November. OPEC’s decision to maintain current production levels and create oil price instability appears to be a long term strategy to undermine the higher cost of oil production, including the US unconventional shale oil producers.

Global equity markets extended the October sharp rally in November. Australia did not participate in this rally and the ASX200 index declined 3.8%.

Following continued weak Eurozone manufacturing data, the ECB indicated there will be further monetary easing to stabilise the deflationary forces. These announcements have provided positive tailwinds for European equity markets with the DAX up 7% in November.

Japan’s Prime Minister was re-elected in December and announced there wouldn’t be a further increase in the sales tax. This decision follows on from the ¥30 trillion increase in the quantitative easing package announced in October.

Global equity markets are in a comfortable position. China, Japan and Eurozone Central Banks are either cutting interests or employing massive QE to maintain economic growth. The US has completed its QE and is at the point of looking at the appropriate time to raise interest rates. In Australia, interest rate rises are still a long way off. Lower oil prices should also be a positive which usually indicates improved consumer confidence.

Following the improved Q2 and Q3 GDP data, the US economy continues to gain traction in Q4 with an increase in job creation, housing starts, manufacturing and services data and business investment.

The ISM non-manufacturing data was at a near 9-year high.

OPECs decision to maintain current oil production would appear to be a strategy of reclaiming long term market power particularly in Asia, the fastest growing global region, by closing off higher cost oil production from the US and Canada.

The USD continues to gain ground against the EUR, Yen and AUD. The USD is anticipated to maintain strength against major global currencies throughout 2015. This is due to improved US economic growth, the prospect of US increasing interest rates in 2015, the weakness in the Eurozone and Japan economies and the need by their Central Banks to provide further QE, and the weakness in commodity prices.

The US CPI data continues to be relatively benign with the October data remaining steady at 1.7%.

Housing starts continue to be volatile and remain well below the pre-GFC levels of 1.6 million per annum. October housing starts declined 2.8% after a 7.8% increase in September. Housing may well be a beneficiary from lower oil prices and improved consumer confidence.

Valuations of US companies do not seem excessive. Based on a 12mth rolling forward earnings base, the current PE multiple is 16 times.

Eurozone economic data remains weak. The ECB stated – ‘if the current policy initiatives don’t address the threat of too prolonged a period of low inflation, the Governing Council remains unanimous in its commitment to using additional unconventional instruments within its mandate.’

The annual inflation in the Eurozone was 0.3% in November, (0.4% in October) as declining energy prices suggested deflation remains a real threat for the ECB. The ECB target inflation is 2%.

The UK is expected to grow faster than any G7 country in 2014. Manufacturing activity increased momentum in November as domestic demand offset falling exports, due to sluggish orders from the Eurozone and emerging markets.

The UK economy grew by 0.7% in Q3, and 3.0% yoy. In December, the UK Treasury released its Autumn economic forecasts, with business investment expected to grow at 7.7% in 2014.

Over in China, the PBOC’s decision to reduce interest rates has provided a strong injection across the China equity market. The Shanghai Composite Index was up 10.85% in November. Over the past 20 trading days the SCI has risen 17.3%. The interest rate cut clearly signals that the Chinese Government is determined to support growth.

China’s leadership and Central Bank are preparing for further cuts to interest rates and relax restrictions on lending after concerns that falling prices could trigger a surge in debt defaults, business failures and job losses.

Corporate valuations have appeared on the lower side for a considerable period of time and remain so relative to other global equity markets.

Growth in industrial output, exports and investment all slowed in November as export and domestic demand softened, while the property market – seen as the biggest risk to the economy – was likely to remain weak, despite some signs of bottoming out.

The Japanese Government announced that there would not be any further increase in the sales tax. At the same time however, Prime Minister Abe announced an election in December and was subsequently re-elected. Following on from these announcements, the Yen continued its slide against all major currencies.

Turning to the global implications, additional asset purchases by the BOJ, should provide further global stimulus, following the completion of the US Federal Reserve’s dial down of QE3. The extra ¥30 of annual JGB purchases would be worth around US $22 billion per month.

It’s worth reiterating that at the time of the quantitative easing, the BOJ also added that the so-called “quantitative and qualitative easing” program would continue “as long as it is necessary”.

Japan’s October annual core inflation came in at 2.9%, compared to 3.0% in September.

The RBA kept the cash rate at 2.5% in December and it is anticipated that interest rates will remain at this level well into 2015.

The Australian economy continues to adjust to the declining mining investment and the challenges around getting traction across the non–mining sector of the economy. Although Q3 GDP data was weak, indicating 2.7% yoy data, there are signs that Q4 data may improve.

Building approvals rose 11.4% in October, reversing the 11.2% fall in September. The October gain was led by a 31.3% rise in apartment approvals, two-thirds of which was due to Victorian apartment approvals. Importantly, the overall continuation of construction activity remains solid.

Sydney house prices continue to rise (up another 1% in November), while Melbourne prices are easing (down 2.6% in the month). The rest of the country is still showing modest annual growth of between 1-6% yoy. RP Data for November showed that house prices averaged a decline of 0.3% across the country.

The RBA continues to suggest that the AUD is too high and believes that it should be considerably lower. However, higher yields in Australia remain to be a source of investment for international investors.

The November AiG PMI Manufacturing increased, improving from modest levels, but showing signs that some of the improvement is taking place from the low interest rate environment.

NAB Economics continues to expect no change in the RBA’s cash rate until a tightening cycle begins towards the end of 2015. Interestingly, the market expectations have pushed any increase in interest rates into 2017.

The sharp global share market rally in October continued through to November. The standout has been the Chinese Shanghai Composite Index that was up 10.9% in November and up 17.3% over 20 trading days, to end of 15 December.

The S&P/ASX 300 Accumulation Index did not participate in the November rally and declined by -3.24%. The Australian equity market was impacted by the slide in oil and iron ore prices, the weaker economic data and the uncertainties created across the banking sector from the pending Financial System Inquiry (FSI).

The S&P/ASX 300 Industrials Accumulation Index also declined in November, down -1.95%, but not as significantly as the broader indices.

The broader S&P/ASX All Ordinaries Index was down -3.8% in November.

Interestingly, after strong performances across all sectors, (other than Energy and Materials) in October, sector performances declined significantly in November. Energy, Consumer Staples and Materials were the worst performing sectors, down -13.1%, -8.1%, and -5.6% respectively. Only Healthcare and Telco’s were positive, both sectors up 1.2%, Property was flat for the month. 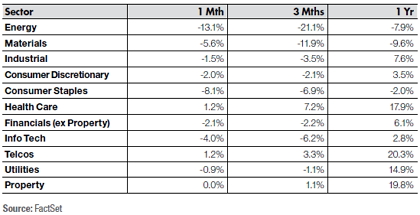 While US quantitative easing may have ended, it’s being replaced by QE in Japan and Europe and rate cuts in China. Rate hikes appear to be a fair way off in the US and a long way off in Australia. This in turn, bodes well for growth assets.

Global equity markets had a solid continuation from the improved October data. In November, the recovery was more pronounced in China as well as Europe, with Germany, France and the UK all performing strongly.

The Shanghai Composite Index was up 10.8% in November

The US Dow Jones Index had a strong performance in November – up 2.5%.

The Euro 100 Index was a disappointing relative equity market performer in November – up 4.5%.

The German DAX Index had an outstanding month in November – up 7.0%.

The Japanese Nikkei Index also had a strong performance in November – up 6.4%.

Over 1, 3, 5 and 7 years, global REITs outperformed Australian REITs (A-REITs) Global property, as represented by the FTSE EPRA/NAREIT Index, was up 22.63% over the rolling 1year period.

Global bonds (unhedged), as measured by the Barclays Capital Global Aggregate Index, posted positive returns for the one year period ended 30 November 2014 – up 7.79%. The hedged index posted a strong one year gain of 9.16%.

In November, the Australian Dollar (AUD) was weaker relative to all the major international currencies.

The information contained in this Market Update is current as at 15/12/2014 and is prepared by GWM Adviser Services Limited ABN 96 002 071749 trading as ThreeSixty Research, registered office 105-153 Miller Street North Sydney NSW 2060. This company is a member of the National group of companies.