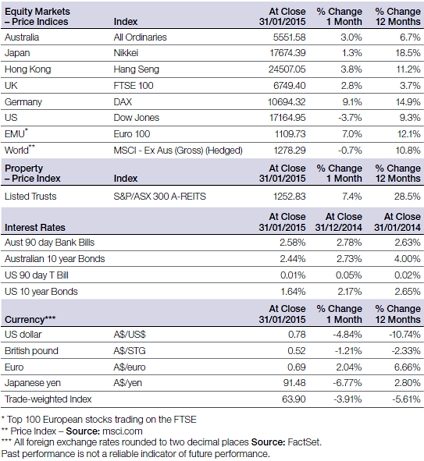 A number of Central Banks, including China, Canada and Australia have staged a round of monetary stimulus through a combination of lower interest rates, while the ECB has finally committed to a €60b per month Quantitative Easing program.

Global bond yields have continued to decline with extended low inflationary expectations, sub-trend growth and, the likelihood that the US Federal Reserve will continue to be ‘patient’ and remain data dependent in the decision to raise US cash rates.

The USD has continued to strengthen against most currencies, appreciating 7.2% against the EUR.

The IMF downgraded world growth expectations for 2015 from 3.8% to 3.5% and suggested that the decline in oil prices will not offset the weaker growth prospects from China, Europe and Japan.

Oil prices continued to decline in January, down 9.4%. This represents a decline of 47% over the past 4 months. Although in early February a sharp reversal had occurred in oil prices.

China reported GDP growth of 7.3% in 2014, which was below the Government’s forecast rate. Following the November 2014 interest rate cut, the PBoC announced a further cut in interest rates in early February.

Russia continues to be impacted by the sharp oil price collapse.

In the US, the January ISM Manufacturing report came in at 53.5 (down from 55.1). Despite the decline, this result continues to indicate reasonable growth in US manufacturing.

Following the strong Q3 GDP of 5%, the US economy grew at a 2.6% seasonally-adjusted rate in Q4. Personal consumption (+4.3%) recorded its strongest quarter since 2006.

The FOMC confirmed that the Fed is on track for rate increases in 2015. The FOMC upgraded its view of job growth from “solid” to “strong’ and is further evidence that the US economy is recovering.

Housing starts continue to be volatile and remain well below the pre-GFC levels of 1.6 million per annum. Housing starts rose 4.4% in December from November to an annual rate of 1.089 million. Housing starts on single-family homes – which exclude apartments – rose to a rate of 728,000, the highest level since March 2008.

The Fed upgraded its description of economic growth from “moderate” to “solid pace”, in line with the 5% annualised rate seen in Q3 and 2.6% in Q4. The Fed noted that the recent declines in energy prices have boosted household purchasing power. The statement acknowledged a further improvement in labour market conditions.

The FOMC added that market-based measures of inflation expectations have “declined substantially” in recent months, but while inflation is “anticipated to decline further in the near-term’. The Committee expects inflation “to rise gradually toward 2% over the medium-term.”

US corporate earnings estimates for 2015 indicate a 7% operating earnings growth relative to 2014 and do not seem excessive. The current 12-month forward P/E ratio is 16.2 based on a forward 12-month EPS estimate.

The USD/EUR was up 7.2% in January and appreciated 21.8% in the 12month period to 31 January, 2015 and reflects the strength of the US economy and challenges across EU nations.

The ECB announced a €60b per month commitment to QE. This represents a €1.1 trillion commitment until September 2016.

The Eurozone economy continued its anaemic growth in January and suffered its worst quarter for more than a year.

The ECB has cut off access to credit through the use of Greece’s own debt as collateral, Greece can still utilise the Emergency Liquidity Assistance (ELA) as it did for much of 2012 when it tapped this facility for over €120b.

The European Union announced that consumer prices fell by 0.6% in January after a decline of 0.2% in December. A drop of nearly 9% in the oil prices and other energy costs accounted for most of the decline.

In January, UK PMI data for both manufacturing and services indicated that the economy is continuing to perform strongly, extending the strong 3% GDP growth in 2014.

In January, China’s economy grew 7.3% in Q4, compared to the same time last year and 7.4% in 2014. The Government had set an official growth target of 7.5% for 2014 and for the first time in more than 15 years, the growth objective has not been met or exceeded.

In late January, in response to weakening growth, China re-joined other Central Banks in easing monetary policy. The PBoC announced a cut in its Reserve Requirement Ratio of 50 bps from 20.0% to 19.5%. This follows the November interest rate cuts. The ratio was cut further for lenders to the rural sector and small business.

Although the China equity market has rallied strongly off a low base, corporate valuations remain attractive.

Over to Japan, economists are keenly waiting a further positive impact from the oil price slide – the economy should be a strong beneficiary of the significant decline in the USD price of oil given it is a major importer of energy.

Japan’s economy is rebounding from a mild recession after a sales tax increase last April 2014 and, has been boosted by cheap oil and a weakening Yen. The economy is expected to grow an annualized 3.2% in Q4, 2014 and an annualized 2.1% in Q1, 2015.

The inflation rate in Japan was recorded at 2.4% in December 2014, unchanged from November and largely impacted by the sharp fall in global oil prices.

It’s worth reiterating that at the time of the December quantitative easing, the Bank of Japan (BOJ) also added that the so-called “quantitative and qualitative easing” program would continue “as long as it is necessary”.

The RBA cut the cash rate by 25bps to a new low of 2.25% at its recent February meeting.

The Board’s decision was based on economic growth which is expected ‘to be below trend for a while longer and, the unemployment rate peaking a little higher than expected’. The upside risk to housing is mitigated by ‘the Bank working with other regulators to contain economic risks that might arise from the housing market’.

The Bank reiterated the view that the AUD remained above most estimates of fair value, with a lower exchange rate (still) likely to be needed to achieve balanced growth.

However, despite lowering interest rates in February higher yields in Australia continue to remain a source of investment for international investors.

The Westpac – Melbourne Institute Index of Consumer Sentiment improved by 2.4% in January. The index is still down by 9.7% yoy and only back at the levels it was in the immediate aftermath of the Federal Budget, when the index had tumbled by 6.8%.

The January CoreLogic RP Data house price report showed residential property prices still rising. For the eight capitals, prices rose 1.3% in January and, 8.0% yoy. Sydney had the strongest growth in January, up 1.4% and 13.0% yoy. Low interest rates are working in the housing sector with anecdotal evidence suggesting that foreign investment is also playing a role.

The underlying CPI rate averaged 0.7% qoq rise and an increase of 2.2% yoy still well within the RBA’s target.

The NAB Business Survey for Q4 showed that business confidence eased back below the long run average level.

The S&P/ASX 300 Index had an extremely strong performance in January, up 3.2% on the basis of a weaker AUD, the ECB announcing a €60b quantitative easing program, lower bond yields and, an increased expectation that the RBA would lower interest rates and keep them there for an extended period.

The broader S&P/ASX All Ordinaries Index rose by 3.0% in January.

The strong performance across Industrials, Healthcare, Telco’s and Property in December has been followed by a further increase in January. The strong rally in bond yields and the prospect of an extended period of low interest rates resulted in the interest rate sensitive sectors continuing to rally. Telco’s, Property and Utilities had an exceptional performance and were the best performing sectors – up 8.2%, 7.4%, 6.0% respectively. Energy continued to disappoint – down -6.6% (but were off their lows by month end), while Information Technology was down, – 1.7%. 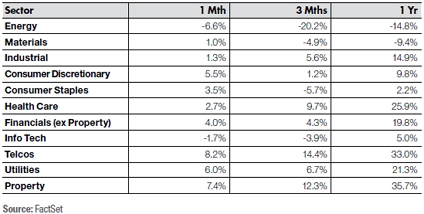 With the exception of the US, the global equity markets generally had a strong month in January.

The ECB announcement of a €60b QE program, the strong global bond rally, the expectations of an extended period of low interest rates and the continued weakness in oil prices, each combined to push equity markets higher through January.

The Japanese Nikkei Index was also up 1.3%.

The UK FTSE was sharply higher in January, up 2.8%.

On a 12 month rolling basis, the Australian listed property market, as measured by the S&P/ASX 300, A-REIT Accumulation Index was up 35.66%, which significantly outperformed the ASX300 Accumulation Index which was up 12.05%. The hunt for relative yield and hard assets helped pushed the A-REITs higher.

Over 1 and 3 years, Australian REITs (A-REITs) outperformed global REITs while this was reversed over 5 and 7 years. Global property, as represented by the FTSE EPRA/NAREIT Index, was up 30.95% over the rolling 1 year period.

Global bonds (unhedged), as measured by the Barclays Capital Global Aggregate Index, posted positive returns for the one year period ended 31January 2015, up 11.34%. The hedged index posted a strong one year gain of 10.92%.

In January, the Australian Dollar (AUD) was weaker relative to all the major international currencies. The TWI was down -3.9% in January and -5.61% in the 12 month period to 31 January 2015.

The information contained in this Market Update is current as at 5/2/2015 and is prepared by GWM Adviser Services Limited ABN 96 002 071749 trading as ThreeSixty Research, registered office 105-153 Miller Street North Sydney NSW 2060. This company is a member of the National group of companies.

Past performance is not a reliable indicator of future performance. .Before acquiring a financial product, you should obtain a Product Disclosure Statement (PDS) relating to that product and consider the contents of the PDS before making a decision about whether to acquire the product.