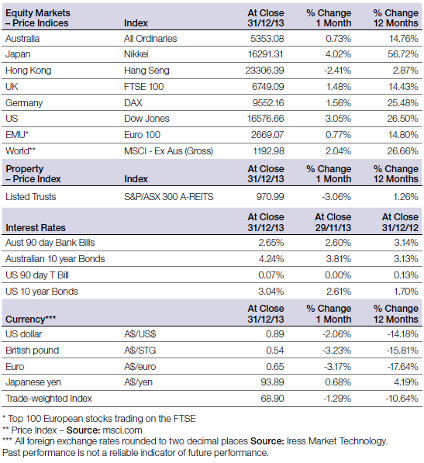 The global economy finished 2013 on a rising tide of job creation and overall higher demand.

In December there was a continuation of the positive manufacturing data global economies saw throughout the last few months of 2013 – with continued signs of improvement especially coming out of the Eurozone.

The key focus in December was the US Federal Reserve’s (the Fed) commencement of the dialling down of quantitative easing (QE3) to US$75b, down from US$85b. Importantly, the Fed indicated that this policy action was in no way a change to the easy monetary stance, and further changes would continue to be data dependent.

In other Fed news, Janet Yellen was voted in by Congress as the next Chairperson of the Fed, set to replace Ben Bernanke on 1 February 2014.

Overall, the continued improvement in most economies, particularly in the second half of 2013, provides further evidence that more synchronised growth can be expected in 2014.

In December, following further improved economic data, the overwhelming focus in the US was on the timing of the Fed’s commencement of the QE3 dial down. The Fed announced an initial modest US$10b reduction in QE3, down to US$75b. However, the Fed was clear to point out that the degree of dial down in QE3 would continue to be data dependent.

Importantly, Janet Yellen, the new Federal Reserve Chairperson elect, was voted in by Congress, and is likely to continue the similar policy settings as set by her predecessor.

US data continued to show further steady traction late last year, with Q3 2013 GDP data revised up to 4.1% – from the 2.8% initially reported in November. This represented the fastest quarterly growth in two years. The key reasons for this improvement were due to larger increases in consumer spending, as well as business investments in commercial real estate, industrial equipment and intellectual property.

From a housing perspective, the October S&P/Case-Shiller House Prices index continued to grow, albeit at a slower rate, up 0.2% on a non-seasonally adjusted basis.

This growth provided a13.6% year-on-year (yoy) increase for the 20 major cities, the strongest annual gain in seven years. And although the data indicated slowing growth, it nevertheless shows a continued recovery in housing. However, higher mortgage rates, the recent Government shutdown, and the higher house prices are likely to be tempering demand.

US consumer sentiment data for November increased, as higher employment opportunities, improved house prices and record equity markets fed through into an improved outlook for spending going into 2014.

Over to Europe, December Eurozone manufacturing data bounced back, although France continued to trend lower and below long-term trend line growth.

The Eurozone PMI Composite Index rose to its second highest level in the past two and a half years. Germany continued to show a positive recovery, while the French economy remained sluggish. Importantly, Germany saw solid and accelerated growth in job creation, with the rate of increase hitting a near two year record.

In December, the recovery in the Eurozone service sector extended to five months. Interestingly, other countries are now joining in on the improved growth, with Spain reporting its strongest expansion in six years.

Chinese manufacturing data continued to expand in December, although the rate of growth slowed. New orders also expanded but at a slower pace than the previous month. The operating conditions for Chinese manufacturers improved for the fifth consecutive month.

China’s economic growth in 2013 is likely to be close to 7.6%. If confirmed, it would be the weakest growth that has occurred since 1999 and in the aftermath of the Asian financial crisis.

Although China’s economic reforms are necessary in order to rebalance the economy, it’s likely that growth will maintain a minimum 7% going forward into 2014 and 2015.

Chinese inflation declined to 2.5% in December, down from 3.0% in November. However this is still well below the Government target inflation rate of 3.5%. The lower inflation data is anticipated to allow the People’s Bank of China to maintain a relatively neutral monetary policy.

Over in the East, Japan’s economy continued to grow at a strong pace in December, though the pace of expansion remained below October’s record high.

The latest PMI data out of Japan showed business activity grew in every month of 2013, representing the longest continuous expansion since September 2007.

Importantly, business activity growth recorded by manufacturers was faster than that recorded by service providers for the seventh straight month.

Consistent with the improved manufacturing data, Japanese inflation, after 15 years of deflation, rose to a five-year high in November and came in at 1.5%. The core inflation rate in November was 1.2%. The Bank of Japan has a 2% inflation target.

The Yen was marginally lower against the USD through December (-2.7%) and declined 17.6% yoy.

The Yen depreciation has been a key driver of the renewed growth stimulus, largely a result of the quantitative easing out of the US.

On the home front, the Reserve Bank of Australia (RBA) has indicated that the economic growth of Australia’s trading partners has been at or around long term averages, while inflation has remained low across these countries.

Consumer confidence was lower in December; largely a result of the softer economic conditions and the announcement of the closure of Holden’s manufacturing business in 2017.

Job creation in Australia’s economy remained sluggish last month, with a big fall in full-time jobs during December – this was only partially offset by an increase in part-time positions. The RBA forecasts unemployment will rise to 6% in 2014.

November trade data was better than expected with a deficit of $118m. This improved trend is expected to continue through 2014, with further increases in export volumes aided by the resource volumes – while import volumes are anticipated to be flat based on a relatively sluggish economy.

Residential property finished 2013 on a strong note with sales volumes at record levels in Sydney and Melbourne. According to RP Data, in 2013 the average house price increased 9.8% across the major capital cities – with dwelling values increasing 1.4% in December and by 2.8% over the final quarter of 2013. Sydney residential prices were a stand out, increasing 14.5%, while Perth and Melbourne increased 9.9% and 8.5% respectively.

The Mid Year Economic and Fiscal Outlook (MYEFO) was released and concluded that the budget would remain in deficit throughout the forecast period until 2016 – 2017. The Budget Deficit for 2013 – 2014 is now estimated at $47b, up from Treasury’s August estimate of $30.1b. There were no Government policy actions announced with the MYEFO.

The real GDP forecast in 2013 – 14 has been revised down to 2.5% from the 3% in the August estimates. The weakness in the economic outlook and the fiscal constraints are likely to keep the RBA on an easing bias through 2014.

The Australian market was marginally higher in December, with the S&P/ASX 300 Accumulation Index up 0.82%, following a weaker performance in November.

The S&P/ASX All Ordinaries Index was also marginally higher in December with a 0.52% increase. Over the rolling 12 month period to 31 December, the index has returned 14.76%.

December was an extremely volatile month with a sharp correction followed by a strong recovery intra-month. However, only the Financials and AREITs sectors were lower across the month, down 1.0% and 1.3% respectively.

On a 12 month basis the Consumer Discretionary sector returned an exceptional 40.7%, while Financials (ex. Property), Telecommunications, and Healthcare were up 34.8%, 28.7% and 25.0% respectively.

The MSCI World (ex-Australia) Accumulation Index was up 1.79% in December, and continued its positive run for the year, up 25.66%.

The US Dow Jones Index reached another all-time high in December, as indications of a recovering US economy continue to gain traction. The index posted a 3.05% gain in December, as economic data continued to improve and resolution to the debt ceiling issues were resolved in Congress. In the 12 months to 31 December, the index returned 26.50%.

The broader S&P500 index also posted a positive gain of 2.36% in December, and maintained an impressive 12 month return of 29.6% for the year.

On a one month basis global property has outperformed the Australian listed property sector, largely reflecting the improving recovery in the US property market.

Global property has also outperformed the Australian listed property sector on a one, three, five and seven year basis.

In comparison, global bonds were influenced by currency movements that largely determined relative performance. In December hedged global bonds, as measured by the Barclays Global Aggregate Index Hedged, posted a 0.36% loss, while the unhedged equivalent returned 1.54%.

In December, the Australian Dollar (AUD) fell 2.06% against the USD to finish the month at USD 89.2 cents. A combination of the low interest rate environment, the weak non-mining sector and the anticipated strength of the USD, should see the AUD weaken through 2014. Against the USD the AUD is down -14.18% for the 12 months.

The information contained in this Market Update is current as at 10/01/2014 and is prepared by GWM Adviser Services Limited ABN 96 002 071749 trading as ThreeSixty, registered office 150-153 Miller Street North Sydney NSW 2060. This company is a member of the National group of companies.