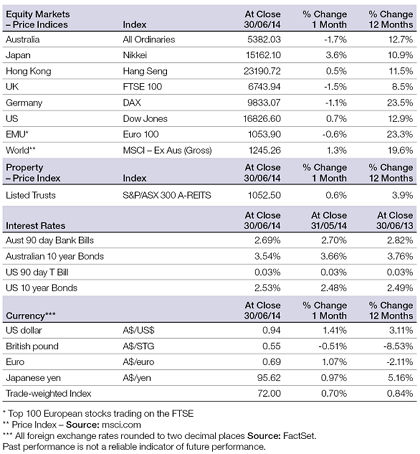 As we reach the middle of 2014, there are further signs that global synchronised economy growth is gaining traction.

Although the US Federal Reserve has revised down its economic growth projections for 2014 and 2015, the US economy is recovering from the extremely weak, weather related, Q1 GDP growth in 2014.

After a sluggish economy in the early part of 2014, China is also showing signs of stabilising, with improved June Purchasing Managers’ Index data. This stabilisation reflects the impact of the recent targeted stimulus program.

The June Eurozone manufacturing data was weaker than expected, largely due to oil price increases and uncertainties created by the Iraq civil war crisis.

At this point in the year, Australian economic growth remains below trend. The RBA has kept the cash rate at 2.5% in July, and it’s anticipated that interest rates will remain at this level well into 2015.

The June US manufacturing data was consistent with an improving economy, delivering the highest index reading since May 2010 with new orders rising sharply.

In the US the Federal Reserve Chairperson, Janet Yellen, has indicated that interest rates will remain near zero for an extended period.

The Government has indicated it will dial down its Treasury purchases to US$35b, commencing 1 July 2014 with the intention to have this program finished by year end 2014.

Existing home sales were significantly stronger than expected in May (+4.9%). April results were revised up to 1.5% from 1.3%, with gains led by the single family sector.

US Non-farm payrolls continued to improve (+288k); with the unemployment rate declining to 6.1% from 6.3% with an unchanged participation rate.

The housing data provides more evidence of a revival from the winter-weather hit, though it’s too early to conclude that the housing sector is back to good health.

Over to the Eurozone, the June Purchasing Managers’ Index data disappointed. This related to both the manufacturing and service sectors. France’s manufacturing data continued its recent weaker trend, while Germany’s rose marginally. The decline was mainly due to a drop in optimism in the industry and construction sectors, and a drop in consumer spending.

Other factors that have weighed on Eurozone growth include the fears that fighting in Iraq would push oil prices higher, as well as concerns of further escalation in the Ukraine crisis.

The European Central Bank (ECB) has introduced a raft of measures aimed at stimulating the Eurozone economy, including negative interest rates and cheap long-term loans to banks. It cut its deposit rate for banks, from zero to -0.1%, to encourage banks to lend to businesses rather than hold on to money.

The ECB is the first major central bank to introduce negative interest rates. The ECB also cut its benchmark interest rate to 0.15% from 0.25% and also indicated that further stimulus would occur if required.

In contrast, June UK manufacturing data was stronger with all the key components showing improvement. The UK has had one of its best quarterly manufacturing performances over many years. Interestingly, production levels have risen strongly, and order books have increased while job creation is at its highest for over three year.

China’s factory growth rose to a six-month high in June, with improving domestic and foreign demand. This recent Purchasing Managers’ Index data is indicative of stabilisation, adding to signs that the economy is regaining strength after an unsteady start to 2014.

With both domestic and external demand expanding, it’s expected that the recent stimulus will continue to support a recovery in the economy.

If necessary, further accommodative policy initiatives can be expected. Government officials have indicated that the Chinese economy will not suffer a hard landing, and will continue to grow at a medium to high pace in the long term without strong stimulus.

These trends remain in line with NAB expectations, and as such, NAB forecasts for Chinese economic growth are unchanged at 7.3% in 2014 (before slowing to 7% in 2015).

Japanese manufacturing activity expanded in June, a sign that domestic demand has quickly recovered from a sales tax increase at the start of April.

The tax hike caused a dip in consumer spending and factory output, but the economy is showing signs that it will quickly bounce back.

Manufacturing Purchasing Managers’ Index in Japan increased to 51.1 in June.

Recent consumer sentiment data has shown some recovery following the impact from the May Federal Budget.

At its July meeting, the RBA left the cash rate unchanged at 2.50%. It retained a neutral bias, identifying that ‘the most prudent course is likely to be a period of stability in interest rates’.

It’s expected that the economy will grow below trend and the RBA prefers a lower $A.

Resource sector investment spending is starting to decline significantly and the inflation outlook is benign, with the economy at sub-trend growth.

Interestingly, the June house price data showed solid rises in home prices across Sydney (1.7%) and Melbourne (1.8%). The lower interest rates are certainly increasing housing demand and will provide an important component to growth in the Australian economy.

It’s anticipated that the renewed house price momentum will keep the RBA on a rate hold.

The S&P/ASX 300 Accumulation Index had a disappointing month in June, declining by -1.45%.

The MSCI World (ex-Australia) Accumulation Index posted a solid return in June, up 1.3%.

The Japanese Nikkei Index was the outstanding equity market, up 3.6% in June.

Australia was the worst performing market in June. Apart from Australia, down -1.7%, the UK market also under performed, down -1.5%.

Australian bonds rebounded after a poor June. For the month, the UBS Composite Bond All Maturities Index was up 1.37%.

Global bonds, as measured by the Barclays Capital Global Aggregate Index, posted positive returns for the month of June. The unhedged index posted a small gain of 0.14%, while the hedged equivalent had a solid positive return of 1.17%.

In June, the Australian Dollar (AUD) was up relative to the four major currencies. The AUD increased 1.3% against the US Dollar (USD) to finish the month at 94.32 US cents. Over the past 12 months the AUD has increased against the USD, by 3.23%.

The information contained in this Market Update is current as at 2/7/2014 and is prepared by GWM Adviser Services Limited ABN 96 002 071749 trading as ThreeSixty Research, registered office 150-153 Miller Street North Sydney NSW 2060. This company is a member of the National group of companies.