Global bond yields climbed during May – a reflection of the growing expectation that global growth will improve. The Organisation for Economic Co-operation and Development (OECD) has forecast global growth to be 3.1% in 2013 and 4% in 2014. 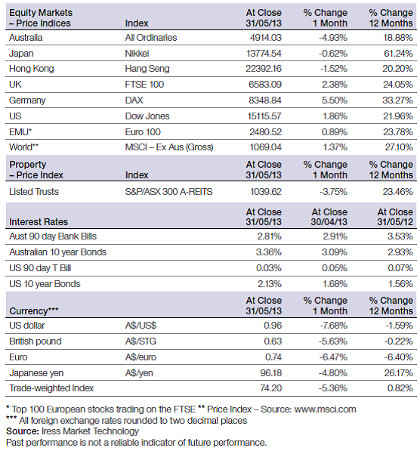 US data continued to show sustainable growth as consumer confidence, employment and housing all delivered positive results last month. This growth has been further reflected in the positive momentum of the US dollar and higher bond yields.

In May, consumer confidence was up 7% – a five year high – and was boosted by a better jobs outlook, rising home prices and increased optimism around business conditions.

From an employment perspective, the slow, steady growth in the job market has seen an average of 208,000 jobs added each month since November. This is well above the monthly average of 138,000 in the three year period up to November 2012.

The unemployment rate also fell to a four year low of 7.5%. However, the participation rate has fallen because many people have given up looking for work.

Housing was another area of growth last month, as home prices jumped 10.9% year on year (yoy) in March, the largest increase since April 2006. Higher home prices and equity market gains are also having a positive effect on household wealth.

Creating waves throughout global markets, comments by the Federal Reserve (Fed) Chairman during question time in a speech to Congress, indicated that any dialling down of quantitative easing (QE3) would be solely data dependent.

However, the improving US economy has prompted investors to consider how the Fed will dial down the QE3 over the coming years, and the likely impact on the economy.

Over to Europe, the European Central Bank’s (ECB) recent bail-outs have resulted in a calmer economic outlook throughout May.

While this was a welcome change, the Eurozone economy shrunk by 0.2% in the first quarter of 2013. This is the sixth consecutive quarter of decline, making it the Eurozone’s longest ever recession.

In positive news for the region, the Economic and Monetary Union (EMU) is a more stable union today than it was a year ago. What’s more, ECB President, Mario Draghi’s current economic activities are likely to stabilise the region sooner rather than later, and will be supported by the gradually improving consumer confidence and lower inflation rates.

Over in China the recent global uncertainties and weakening domestic demand have seen the OECD cut its forecast for 2013 economic growth to 7.8%, from 8.5%.

The OECD predicts growth in the world’s second-largest economy may recover to 8.4% in 2014. However, growth is expected to pick up by the middle of 2013 due to strong growth in credit and more supportive fiscal policy.

Credit growth increased in the January-April period, with bank credit growth in April up 16.1% yoy and retail sales up 12.8% yoy.

Industrial production also picked up in April to 9.3% – however it was still well below the long run average. The official China manufacturing PMI data was down slightly to 50.6 in April, from 50.9 in March.

China’s current low inflation rate (April 2.4%) is likely to leave room for the central bank to relax monetary policy, while giving fiscal policy the opportunity to continue to expand.

Over in the East, Japan’s Nikkei was down 0.6% last month – although this didn’t reflect the volatility seen throughout the month. The Nikkei was another market that reacted negatively to the US Federal Reserve’s comments about scaling down their quantitative easing.

Economists expect the Japanese market to recover somewhat in the coming quarters as a result of strong exports and private consumption. However, risks to this outlook remain, including the continued uncertainty in the sustainability of the global economy, underlined recently by some inconsistent data from the US and China – Japan’s two biggest export markets.

On the home front, Australian data was dominated by the Federal Budget last month.

Lower corporate tax receipts, significantly lower revenues from the Minerals Rent Resources Tax, and higher expenditures have led to a forecast $19.4 billion deficit blowout in 2013/2014 – this is in comparison to the $2 billion budget surplus forecast in May 2012.

The Government has now forecast the Nation’s Budget will return to surplus in 2016/2017. However, investment markets lack significant confidence in the Government’s forecast capabilities.

In addition, a combination of the forecast budget deficit, low interest rates and improving US growth prospects, have led to a weaker Australian dollar (AUD). Taking these factors into consideration, the AUD is likely to remain under pressure in the coming years.

While interest rates will continue to be a key focus for investors and markets alike, there are strong signs that the lower interest rates over the past six months are having a positive impact on consumer confidence. This confidence has been reflected in the increase in residential auction clearance rates across Sydney and Melbourne. It’s expected the residential property market will also be positively impacted by the lower AUD – which has fallen 9% over the past two months against the USD.

Unemployment has remained relatively steady over the past three months, with the April data slightly lower at 5.5%, compared to 5.6% in March.

Making headlines last month, Ford Australia announced its plans to cease local manufacturing in 2016; citing the cost of manufacturing was twice as high as Europe and four times that of Asia.

There was a strong shift across the Australian market sectors, from the traditionally defensive yield based sectors to the resources sector.

The resources-based Materials and Energy sectors have been serious underperformers over the past 12 months, however in May they posted strong relative gains returning 2.16% and 2.06% respectively.

The Consumer Staples and the Financials sectors were the worst performing sectors, down -9% and -8.4% respectively, while Utilities and Telecommunications also fell in May.

The MSCI World (ex-Australia) Accumulation Index was up 2.3% in May, and continued its positive run for the year.

The US Dow Jones reached another all-time high in May as indications of a recovering US economy continue to surface. The index posted a 1.9% gain in May, despite the increased volatility in global markets resulting from the Fed’s Congress comments.

The Japanese Nikkei was also impacted by the Fed’s QE3 comments. And while the index was only marginally down 0.06% at the end of May, the result didn’t accurately reflect the volatility seen throughout the month

However, the Nikkei has been a standout performer in global markets over the past 12 months, returning 61.2%.

In May, the S&P/ASX 300 A-REIT Accumulation Index posted a -3.7% decline, a significant drop from its recent rallying.

Australian bonds were subdued in May following a strong month in April, with the UBS Composite Bond All Maturities Index marginally lower, posting -0.07%.

In comparison, global bonds were influenced by currency movements that largely determined relative performance. In May hedged global bonds, as measured by the Barclays Global Aggregate Index Hedged, posted a -1.3% loss, while the unhedged equivalent returned 5.05%.

In May, the Australian Dollar (AUD) fell -7.7% against the USD to finish the month at USD95.8 cents. The fall was sparked by the continual appreciation of the USD and the prospect of weaker economic data out of Australia and China.

The information contained in this Market Update is current as at 05/06/2013 and is prepared by GWM Adviser Services Limited ABN 96 002 071749 trading as ThreeSixty, registered office 150-153 Miller Street North Sydney NSW 2060. This company is a member of the National group of companies.