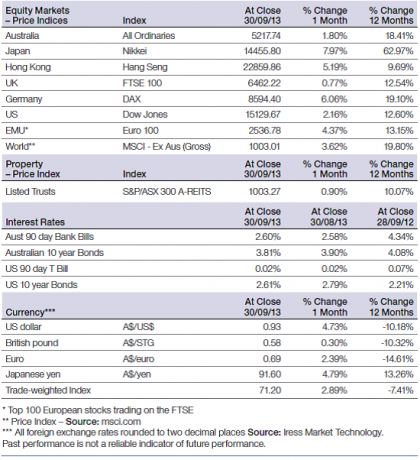 The improved data out the US has been accompanied by the recovering Eurozone, particularly data out of Germany and France, while China appears to have stabilised following the weaker results seen earlier this year. Japan is also showing a positive response to the massive monetary and fiscal stimulus.

The improving global growth outlook is looking to become more synchronised across countries in 2014.

The overarching issue in the US is the need to resolve the Congress’ budget impasse. At the time of writing, a partial Government shutdown was in place. Global markets are expecting an early resolution with minimal impact on the growth outlook.

The rally in US 10 year bond yields in August retraced somewhat during September, as the Federal Reserve (The Fed) continued its view that any dialling down of quantitative easing (QE3) would be data dependent. The Fed surprised the market by maintaining the QE3 status quo in September, as US 10 year bond prices declined from 3.1% to 2.61%.

From a housing perspective, the July S&P/Case-Shiller House Prices index was up 1.8%, providing a 12.4% year-on-year (yoy) increase for the 20 major cities. Although the data indicated a slowdown from the 2.2% increase in June, it nevertheless shows a continued recovery in housing.

The August unemployment rate declined marginally to 7.3%, with a net gain of 169,000 jobs being created. While the US unemployment rate has been improving, the pace of improvement continues to be a point of concern and remains a key focus for the Fed.

The US inflation rate continues to be subdued with August Consumer Price Index (CPI) coming in at 1.5% on an annual basis. A number of Fed members are more concerned with deflation rather than inflation.

Over to Europe, economic data continued to show signs of improvement with the September Flash Eurozone Purchasing Manufacturers Index (PMI) rising to a 27 month high. This represented the sixth consecutive monthly increase.

In September, French business activity grew for the first time since early 2012, as a recovery in the service sector offset lingering weakness in manufacturing. Stronger-than-expected service sector activity lifted France’s composite purchasing managers index (PMI) to 50.2, from 48.8 in August.

China’s economic data has shown encouraging signs and has eased concerns of a hard landing for the economy. However, considerable uncertainty remains as the economy moves through a readjustment phase.

China’s August CPI of 2.6% yoy was marginally lower than the July figure of 2.7%, and indicates continued control of broad inflationary pressures. This is still well below the Government target inflation rate of 3.5%.

Industrial production (+10.4% yoy) and retail sales (+13.4% yoy) indicated stronger-than-expected industrial output and reinforced the prospect that China’s economy is stabilising, following the slowdown seen over the past two years.

This comes at a time when global investors have been nervous because of the prospect of a gradual removal of QE3 in the US. The most recent batch of partial economic indicators provide further evidence that China’s economy may be stabilising, supported by improved foreign demand and a shift in policy stance.

NAB Economics has maintained its forecast of 7.5% growth for 2013, decelerating to 7.25% in 2014 and 7% in 2015. Regarding the monetary policy outlook, it’s expected the Central Bank will continue ensuring adequate liquidity for domestic banks, while maintaining tighter overall monetary conditions to discourage speculative investment and rapid credit growth.

Over in the East, Japan’s economic data continued to improve in September. Sentiment has been boosted by the awarding of the 2020 Olympic Games to Tokyo. This coincided with an upward revision of the 2013 Gross Domestic Product (GDP) from 0.6% to 0.9%. This revision is giving support to Prime Minister Abe’s strategy of reinvigorating the economy through the quantitative easing and infrastructure spend.

The August employment data was very positive, with Japan recording its lowest levels of unemployment and better job creation since 2008. This data provides positive indications that Prime Minister Abe’s aggressive monetary and fiscal stimulus may be gaining traction.

On the home front, the Liberal National Party formed the new Federal Government. The Coalition Government is expected to provide greater business confidence through engagement, transparency and consistency in policy settings than its predecessor. This expectation has been reflected in the August consumer and business confidence surveys completed in the lead up to the election.

Domestic economic data continues to point to a weaker environment into 2014. The NAB Monthly Business Survey employment index has been trending lower and suggests there is clear downside risk to employment growth in the coming year. NAB is forecasting the unemployment rate to rise above 6% by the end of 2013 and to 6.8% by the end of 2014.

Residential property has been a strong talking point over recent months as underlying strength in prices underpins the pent up demand. Australia’s major capital cities continue to experience above average clearance rates. According to RP Data, capital city home values have increased on average by 6.5% in 2013 (end September), with Sydney and Melbourne being the standouts with an increase of 9.4% and 6.9% respectively.

Job vacancies for the June quarter rose 3.1%, although this was 20% lower than the previous year. The unemployment rate increased marginally to 5.8% in August, up from 5.7% in July, and is expected to remain in an uptrend given the declining employment levels in the mining sector and the sluggish non-mining sector.

The Australian market continued to trend higher in September, with the S&P/ASX 300 Accumulation Index posting a strong performance of 2.2%, following a sideways movement in August.

The S&P/ASX All Ordinaries Index was also higher in September, with a 1.8% rise. Over the rolling 12 month period to 30 September the index has returned 18.4%.

The stand out September sector performances were across the cyclicals, namely, Industrials, Information Technology and Consumer Discretionary, returning 5.6%, 3.6% and 3% respectively. On a 12 month basis Consumer Discretionary returned an exceptional 48.2%, while Financials (ex Property) and Telecommunications were up 37.5% and 35.6% respectively.

The resources-based Materials Index has been a substantial underperformer over the past 12 months, down 0.7%. However, in September the index posted solid gains, returning 2.2%.

The Energy sector was a solid performer in September, up 1.9% while the 12 month performance has been strong at 14.8%.

The Healthcare, Consumer Staples and Property sectors were the worst performing sectors in September, returning -1.8%, 0.3% and 0.9% respectively.

The MSCI World (ex-Australia) Accumulation Index was up 3.8% in September, and continued its positive run for the year, up 20%.

The US Dow Jones Index reached another all-time high in September as indications of a recovering US economy continue to gain traction. The index posted a 2.2% gain in September despite the increased volatility in global markets resulting from the Fed’s comments, Syria and the Congress fiscal stalemate. In the 12 months ended September, the index returned 12.6%.

The broader S&P500 index also posted a positive gain of 3.0%, and maintained the impressive 12 month returns to end September at 16.7%.

The Nikkei has been a standout performer over the past 12 months, returning 63% to 30 September. The index was up 8.0% in September, and is consolidating at around the 14,500 level.

Australian bonds were reasonably steady in September with the UBS Composite Bond All Maturities Index marginally higher posting a 0.5% gain.

In comparison, global bonds were influenced by currency movements that largely determined relative performance. In September hedged global bonds, as measured by the Barclays Global Aggregate Index Hedged, posted a 0.98% gain, while the unhedged equivalent returned -2.8%.

In September, the Australian Dollar (AUD) rose 4.7% against the USD to finish the month at USD 93.25 cents. A combination of the low interest rate environment, the weak non-mining sector and the anticipated strength of the USD should see the AUD weaken through 2014. Against the USD the AUD is down -10.2% for the 12 months.

The information contained in this Market Update is current as at 01/10/2013 and is prepared by GWM Adviser Services Limited ABN 96 002 071749 trading as ThreeSixty, registered office 150-153 Miller Street North Sydney NSW 2060. This company is a member of the National group of companies.