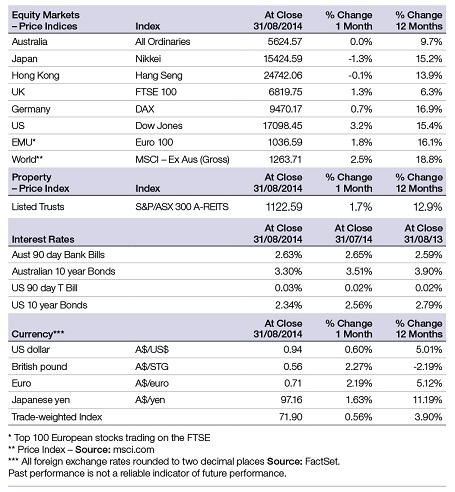 Despite heightened geopolitical tensions in the Ukraine and the Middle East, as well as weaker manufacturing data in Europe and China, global growth continues to be sustained.

The US economy has continued its trend of recovery, with Q2 GDP revised up to 4.2%, from 4%.

There has been a slight improvement in Australian business and consumer confidence, with further momentum across the residential construction sector. The RBA has kept the cash rate at 2.5% in September and it is anticipated that interest rates will remain at this level well into 2015.

Heading over to the US, the improving economic data has continued into Q3, with forecasts for Q3 GDP looking positive.

In July, the US Consumer Price Index (CPI) rose modestly, with the annual core CPI at 2%.

The Federal Chairperson, Janet Yellen, commented that ‘the labour market has yet to fully recover’, but also indicated that the Federal Reserve is becoming comfortable with the timeframe of ending quantitative easing (QE 3) in October 2014, and increasing interest rates in 2015. However, further QE 3 and interest rate increases remains data dependent.

In Europe, economic data remains weak, impacted by the heightened geopolitical tensions in the Middle East and the Ukraine. Particularly, economic sanctions have impacted confidence across the Eurozone.

Pressure has increased on the European Central Bank (ECB) to alleviate the threat of falling prices as annual inflation fell to 0.3% in August, from 0.4% in July. Expectations have increased that the ECB will introduce quantitative easing in the near term.

There was a decline in the Eurozone’s Markit Flash Purchasing Managers’ Index (PMI) data in August, from 51.8 in July to 50.8 in August – a 13 month low. France however, showed signs of improvement relative to the previous three months. The unemployment rate across the Eurozone remained unchanged at 11.5%.The German economy, although continuing to grow, was weaker relative to July.

In the UK, PMI data was weaker; although the credit numbers were better than expected, providing some support for the economy. The unemployment rate across the Eurozone remained unchanged in July at 11.5%.

Over in China, manufacturing growth slowed in August, with manufacturing PMI at 51.1 compared to 51.7 in July. This has been attributed to a weaker property sector and the weakness in the Eurozone as a result of the Ukrainian crisis.

Although Chinese economic growth accelerated to a higher-than-expected 7.5% in the second quarter, up from 7.4% in the previous three months, concerns remain over the weakening property sector with prices continuing to decline through July and August.

It is anticipated that the Chinese government’s monetary and fiscal policies will remain accommodative until there is a more sustained recovery in economic activity.

On the home front, the Reserve Bank of Australia (RBA) left the cash rate unchanged at 2.5% at its meeting on September 2nd.

The ASX-listed corporate reporting season for the 2014 financial year had companies deliver results that were generally in line with expectations. Strong capital management initiatives, via enhanced dividend payments and share buybacks were a standout feature. Forecasts for FY 2015 earnings per share growth are currently in the 5-10% range.

Australian building approvals rose 2.5% in July with private houses up 1.4% and apartments up 5.9%.

ANZ-Roy Morgan Consumer Confidence (for the week ended August 31), showed further improvement in August. The Consumer Confidence data has recovered most of the 5.7% decline that followed the unexpected jump in the published unemployment rate to 6.4%.

Residential property prices continue to remain buoyant. House prices rose 1.1% in August across the eight capital cities. In particular, Sydney rose 1.8% and was up 16.2% year on year (YOY), while Melbourne was up 0.8% and 11.7% YOY.

The AiG PMI Manufacturing data for August was disappointing, with the key index back below 50, now at 47.2, and orders, production, and employment all lower compared to July.

The S&P/ASX 300 Accumulation Index had another positive month in August, increasing by 0.64%. This followed a strong performance in July.

The S&P/ASX 300 Industrials Accumulation Index also had a stellar month, up 1.38%.

The broader S&P/ASX All Ordinaries Index was flat.

For the 12 months to 31 August 2014, the S&P/ASX 300 Accumulation Index posted a solid gain of 14.15%; while the large market caps, represented by the S&P/ASX 50 Accumulation Index, had a similar performance, returning 14.17%. Interestingly, after a strong performance across all sectors in July, the August sector performances had divergent results. Healthcare, Telecommunications and Energy were the best performing sectors in August, up 6.4%, 4.3% and 4.0% respectively.

On the other hand, Materials and Information Technology were the worst performing sectors, down -3.7% and -0.8% respectively.

The Japanese Nikkei Index was the worst performer across global markets covered in this analysis, down -1.3% for the month.

Over the one, five and seven year periods, Global REITs outperformed Australian REITs but over a three year period, Australian property outperformed. Global property, as represented by the FTSE EPRA/NAREIT Index was up 22.99% over the rolling one year period.

Global bonds (unhedged), as measured by the Barclays Capital Global Aggregate Index, posted positive returns for the one year period ended 31 August 2014, up 1.16%. The hedged index posted a strong one year gain of 9.29%.

In August, the Australian Dollar (AUD) was up relative to all the major international currencies. The AUD appreciated 0.6% against the US Dollar (USD), to finish the month at 94 US cents. Over the past 12 months the AUD has increased 5.01% against the USD.

The information contained in this Market Update is current as at 2/9/2014 and is prepared by GWM Adviser Services Limited ABN 96 002 071749 trading as ThreeSixty Research, registered office 105-153 Miller Street North Sydney NSW 2060. This company is a member of the National group of companies. Any advice in this Market Update has been prepared without taking account of your objectives, financial situation or needs. Because of this you should, before acting on any advice, consider whether it is appropriate to your objectives, financial situation and needs. Past performance is not a reliable indicator of future performance. Before acquiring a financial product, you should obtain a Product Disclosure Statement (PDS) relating to that product and consider the contents of the PDS before making a decision about whether to acquire the product.